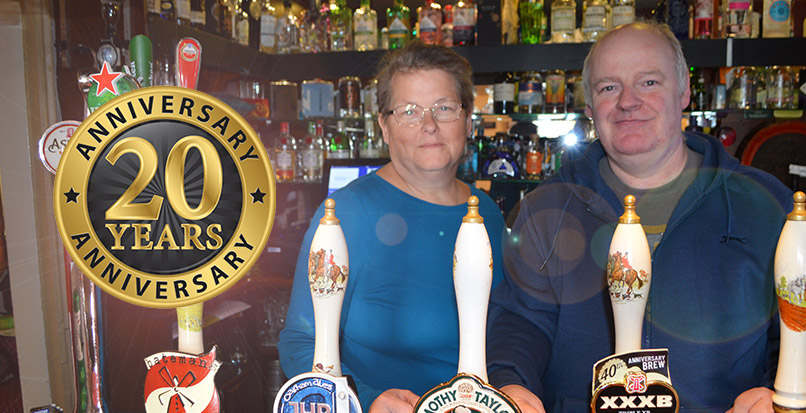 On 9th September 2019 Mal & Diane Gray of the Butcher & Beast in the charming village of Heighington passed a 20-year milestone with Batemans, maintaining their position as the family brewer’s longest serving Profit Partners.

Check out the Butcher & Beast >

Whilst the couple wanted to keep the anniversary celebrations low key, we simply couldn’t let the occasion pass without at least recognising their service.  So, last month Stuart presented Mal & Diane with an engraved crystal decanter of the brewery that he had commissioned in recognition of their long-standing relationship with the Batemans family.

In this day and age, it takes a lot for a licensee couple to remain with the same brewery as long as Mal & Diane have.  The excellent website of the Butcher & Beast explains how they have always felt part of the Batemans Family, not just another number.

Become part of the Batemans Family of licensees >

Being part of a family that you can trust to look after you is something we believe many licensees aspire to.  So, we thought we might take this opportunity to try and quantify Mal & Diane’s sentiments in terms of the support we’ve offered them over the years.

Below are a few examples and some observations on how how the couple have complemented our efforts, with their hard work, to create a wonderful pub.

Last but not least, and to be honest a feature of our relationship that underpins all of the support, is the fact that Mal & Diane, like many of our Profit Partners can pick up the phone and speak directly to someone at Batemans who can help them.  Trust in the personal touch is as important to Batemans as it is necessary to a couple like this to run such a great business.

Diane echoed the points above. When we asked her about the couple’s relationship with Batemans. She said, ‘We really do feel like we’ve been working with friends rather than a landlord, for the last 20 years.  Running a pub is rewarding but it’s hard work too. Being able to pick the phone up and trust the brewery to give you the help you want when you need it is imperative to making this business what it is.  We’re looking forward to working with the Batemans family into the future.’

We’d like to thank Mal and Diane for their friendship, their business and their support of the Batemans Profit Partnership vision.  Beyond that, i’d like to invite like minded licensees who are looking for an opportunity to run a properly supported pub to get in touch.

If you like what you see at The Butcher & Beast, we’d like to show you how you can run a pub with Batemans.

Find your ideal pub as soon as it is listed.