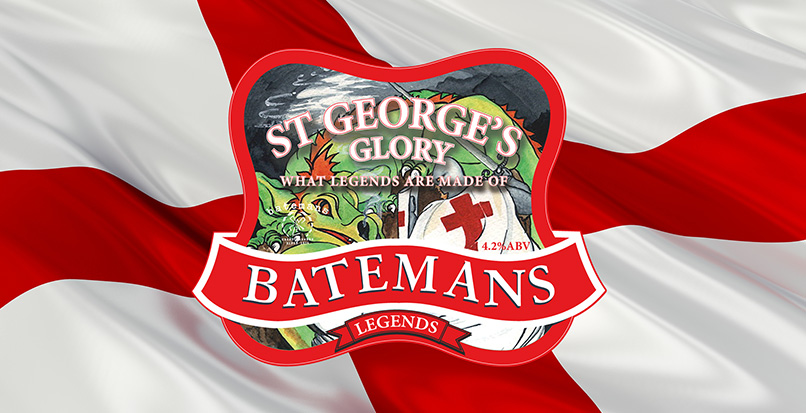 First brewed over twenty years ago in 1999, our St George’s Glory beer was designed to represent all things English. Described as, ‘The perfect pour to celebrate the English national saint’s day.’

It’s a light amber beer brewed with English malt and Styrian Golding hops. It has a medium malt aroma and quite a strong malt backbone in the taste, with slightly more malts than hops in the blend. It’s a full bodied and smooth bitter … as one reviewer put it, ‘…the 4.2% ABV belies its strength and depth of substance.’

St George’s Glory has a zesty, clean flavour appealing to those who enjoy light, easy drinking session beers but the Styrian Golding also imbue it with  a pleasant, spicy and earthy kick.

We reckon you should start off with a decent cheese on toast.  No one makes cheese like the English and melting Cheshire, Lancashire or good old fashioned Lincolnshire Poacher Cheddar with a splash of Worcestershire sauce and a scrape of English mustard is pure heaven. Or maybe served on Lincolnshire Plum Bread. For the main course, what else would fit the bill, other than traditional fish & chips, with mushy peas on the side of course. Finish your English banquet off with the perfect pud – apple crumble and custard.

Like our Hooker Beer for the Six Nations, St George’s Glory is the perfect choice to match the month, April, and your special celebrations on the day itself. It’s practically un-patriotic not too.

Real Ale for a Mythical Saint?

We know the beer’s real but what about St George himself? Well historians think he was born around the third century in what’s now Turkey. So, he was real, but a number of myths subsequently grew up around him.  He was probably a soldier, rather than a knight and was martyred for his faith. He never actually visited England and the dragon was added to his story about 1,000 years after he died. Last but not least, we’ve celebrated him in a serious way as a national saint since the battle of Agincourt in 1415 – along with a number of other countries including Portugal.

Read all about St. George >