As a fourth-generation family brewer, craft brewing is in our blood.

In 1874, George Bateman began making beer for thirsty Lincolnshire farmers who knew a good pint when they tasted one. Ever since, we’ve used the best-possible ingredients and craft brewing methods to ensure the highest quality, not the lowest cost. 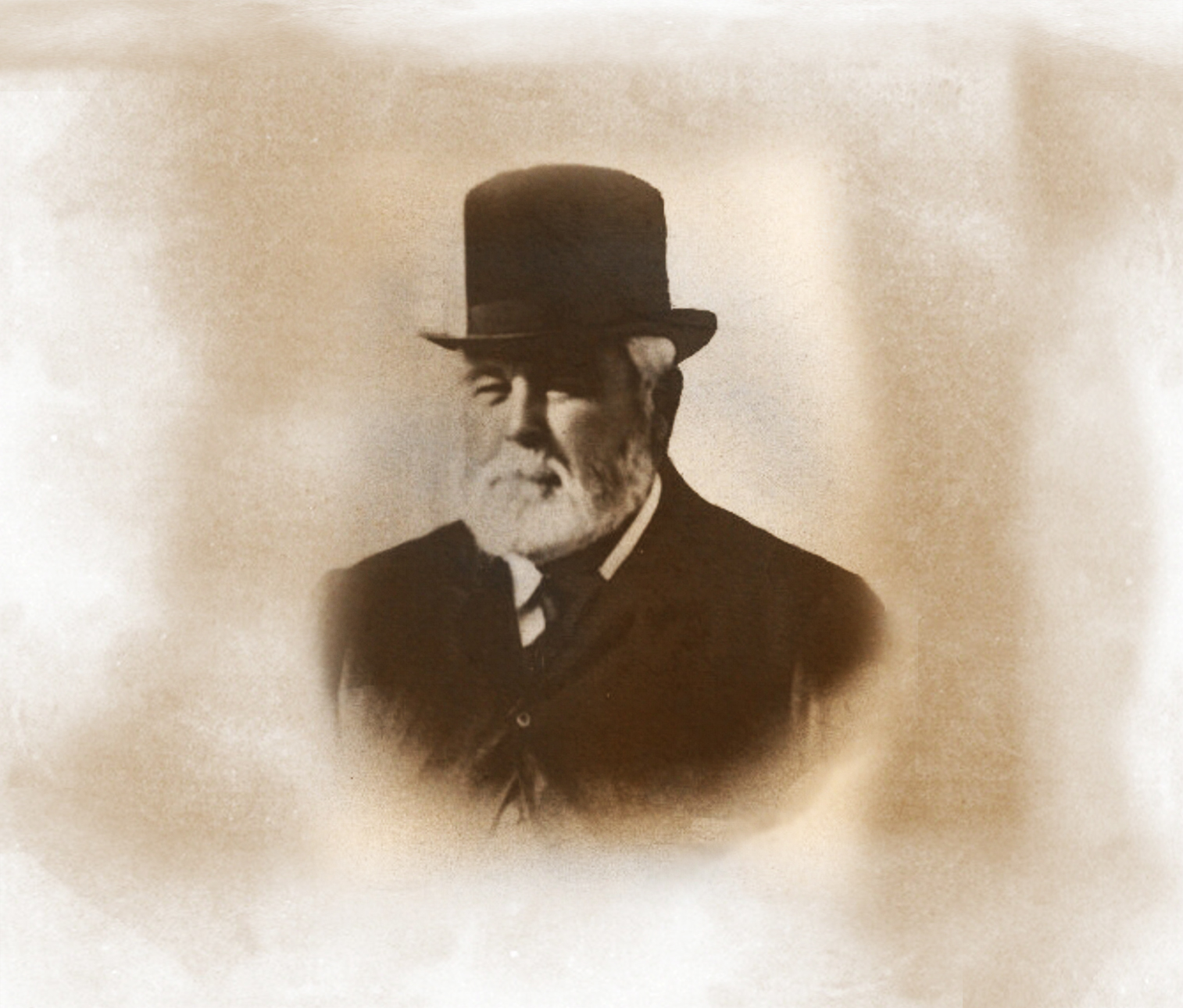 Back in 1874, George and Susannah Bateman’s decision to swap farming for brewing was a bold but savvy move – one which cask beer drinkers far and wide have raised their glasses to ever since.

From the very beginning, George ensured that time-honoured craft brewing methods and the best malted barley and hops went into making every pint of Batemans. That ethos was later to be immortalised by the slogan ‘Good, Honest Ales’.

Technically speaking though, Susannah (our great-grandmother) was the first Batemans brewer. She used to make beer in her kitchen, alongside bread, for the thirsty farm workers.

In 1880, George and Susannah moved the Brewery to Salem House in Wainfleet, with its beautiful old windmill on the bank of the river Steeping. From that day on, the windmill has become a symbol of our commitment to quality brewing.

It’s a commitment that has never wavered. While many regional breweries have closed their breweries or gone out of business altogether, we’ve continued to invest in our Brewery.

By 1960, we were brewing eight beers. There were three draught beers: a light mild, a dark mild, and our classic XB bitter. There were also five bottled beers: IPA, Double Brown, Nut Brown, Light Dinner Ale and BBB barley wine. Until the mid 1970s, naturally conditioned Guinness, Bass and Worthington were also bottled at Batemans.

Our celebrated Triple XB (XXXB) – a smooth yet distinctively flavoured English tawny beer – was first unveiled in 1978 by our then head brewer, Ken Dixon. It fast became a best-seller and big favourite amongst our drinkers. In 1986, it was voted CAMRA’s Beer of the Year at the Great British Beer Festival; and has been named CAMRA Premium Beer of the Year four times since.

Earlier in 2018 we marked Triple XB’s 40th anniversary by returning to the original recipe and strength of 4.8% ABV. The first brew was in January 2018, when we held a ‘pulling of the first pint’ party with four generations of Bateman brewers going back to 1959: with Dennis Hartley, Ken Dixon, Martin Cullimore and, our present brewer, Scott Lawrence. 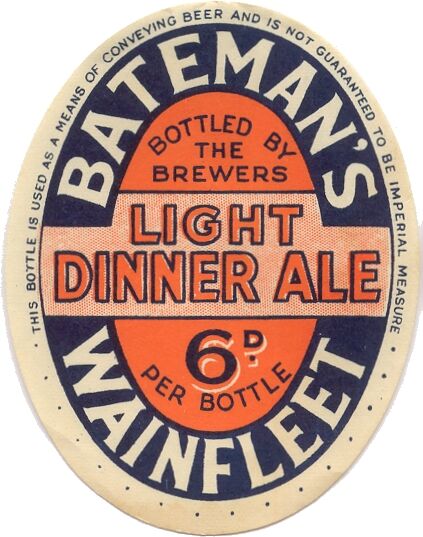 In addition to XB and Triple XB, our permanent cask beer range now includes Salem Porter, which was voted CAMRA’s Winter Beer of the Year in 1997 and 2005. There’s also Yella Belly Gold (in some pubs known as Batemans Gold): a light, citrussy beer brewed with lager malt and American Cascade and Chinook hops. The most recent addition are Skull & Hammers, a blended, slow-matured pale ale. As it’s small-batch brewed, there’s limited availability, and also Dark Fruits Porter, a Gold medal winner at the Perterborough Beer Festival.

A brewer of firsts

Like any true craft brewer, we thrive on a culture of innovation. Whether it’s brewing specialist beers or introducing fairer pub agreements, we’ve never been afraid to go our own way.

In fact, we were one of the first British brewers to experiment with seasonal ingredients that were a bit different to the norm. It all started with Mr George’s Unique Flavours: beers brewed with strawberries, vanilla, liquorice and other ‘fruits of the season’. They went down well, but the flavour of strawberries, in particular, proved to be quite difficult to remove from the pubs’ beer pipes afterwards! 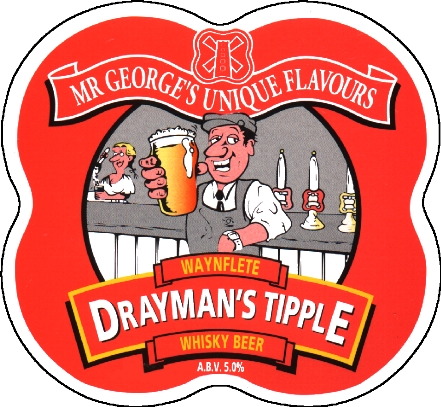 We’ve invented plenty of other specialist brews too. Our Combined Harvest was the UK’s first ever multigrain beer, which we brewed using a blend of malted oats, rye and wheat as well as the usual barley. We felt it was a fitting homage to Susannah Bateman’s lovely bread.

The bottled version of Combined Harvest is available from our online shop – along with the rest of Batemans bottled brews : Triple XB, Victory Ale, Mocha, Dark Lord and Vintage Ale, as well as Rosey Nosey at Christmas.

Showing our creative side

With Mr George’s Unique Flavours, we not only pioneered flavoured beers, we also started something of a tradition for themed monthly specials. There was a place in the market for quirky brews that captured the mood of the moment, celebrated a big event or told fun stories that people could relate to. So we continued that tradition over the years by brewing up all sorts of ideas.

One of the first was Mystic Brews: beers that embodied the different characteristics of star signs, not just in image but also in style. Virgo was brewed with virgin hops. Aries with Ginseng, an aphrodisiac. For Aquarius, we used well-water in the brew. Sagittarius was brewed with smoked malt to evoke fieriness. Gemini was double fermented. Libra was extremely well-balanced. And Leo was strong and golden.

Beer Seller (a national wholesaler) was so taken with the idea that they told us they’d commit to a minimum sales volume if we gave them exclusive rights to sell the beers. So we did, and launched the beers with aplomb at their national sales conference. 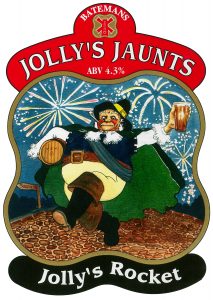 Then came Jolly’s Jaunts. This was a range of beers commemorating the ninetieth ‘birthday’ of the Jolly Fisherman of Skegness, a character from one of the most famous vintage tourism posters in the UK. The idea was focused around Jolly attending special events.

For the World Cup we had Jolly’s Three Lions; for Wimbledon, Jolly’s Deuce; and Jolly’s Rugby Special for the Five (now Six) Nations. We didn’t stop there – we launched Jolly’s Trick or Treat for Halloween, and Jolly’s Rocket for Bonfire Night.

On a jolly roll

Jolly’s Jaunts were so popular that we decided to keep going with the overall theme. So in 1999, as a nod to the millennium celebrations, we dreamt up Jolly’s Generations with our intrepid fisherman posing as pioneers of history. The range included Jolly’s Lightening (for the invention of electricity), Jolly’s Giant Step (for the moon landings), Jolly’s D-Day Landings and Jolly’s (Millennium) Dome.

Jolly’s Follies came the year after, and with them, another innovation. We became the first brewer to introduce three-dimensional pump-clips, which really helped the beers stand out on the bar. Though with names like Hair of the Dog (January) and Kiss Me Quick (February), they didn’t struggle to attract attention.

Another popular range was Good Honest T’Ales, which delved deep into British myth and folklore. Brewing with a variety of different malts and hop styles, we created everything from Loxley’s Liquor (a premium bitter) to Owd Nessie (a Scottish peated beer). 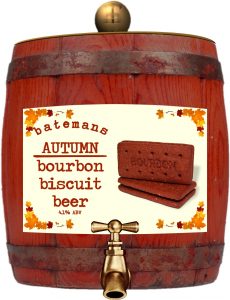 By then, we’d well and truly earned a reputation for playful pump-clips. Who could forget The Calendar Girls? These seasonal beauties celebrated the traditional landlady in, shall we say, a distinctly tongue-in-cheek manner.

More then rolled out our Biscuit Barrel Beers. Who doesn’t love a biscuit with their tea? Joking aside, we wanted to do something fun around the fact that biscuits and beer share common ingredients, which accounts for those lovely biscuity flavours you get from certain brewing malts. So we crafted a series of beers matching classic biscuit flavours to traditional brewing recipes – and the seasons.

One of our most memorable one-off beers has to be England Expects, which has made regular appearances since we brewed it initially for the 2006 World Cup in Germany. The idea was to capture the nation’s optimism and trepidation for their team’s footballing fate in equal measure. 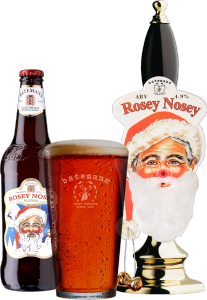 But our drinkers’ favourite of all time has to be Rosey Nosey. Our original Christmas brew became an instant hit in 1998, with its fruity Christmas cake flavour and striking bar profile – a Santa beard and flashing nose on the pump-clip. To this day it’s a festive classic and continues to be one of the country’s most popular Christmas drinks.

Needless to say, Rosey Nosey has a firm place amongst our Legends. To this range we reintroduced some of our most popular beers from previous years, including East Coast Screamer, Pilgrim Fathers, Valiant and Hooker – with more of an emphasis on intensely fruity American hops.

These beers carry on the legacy of our innovation, as well as our sense of humour, and are a great showcase for the great brewing variety for which Batemans has become known.

The revival of craft beer isn’t lost on us. Even while our brewing business has grown, we’ve always stuck by craft’s quality-over-quantity philosophy.

Indeed, our passion for small-batch brewing led us to build our Theatre of Beers Brewhouse, which esteemed beer writer, Roger Protz did us the honour of opening in 2002.

It’s here that our brewer Scott, created our Salem Brew Co range: inspired craft beers naturally flavoured with fruits and spices, not unlike Mr George’s Unique Flavours all those years ago. 2019 series of beers focused on British hops with each beer crafted with a single hop variety from across the land. 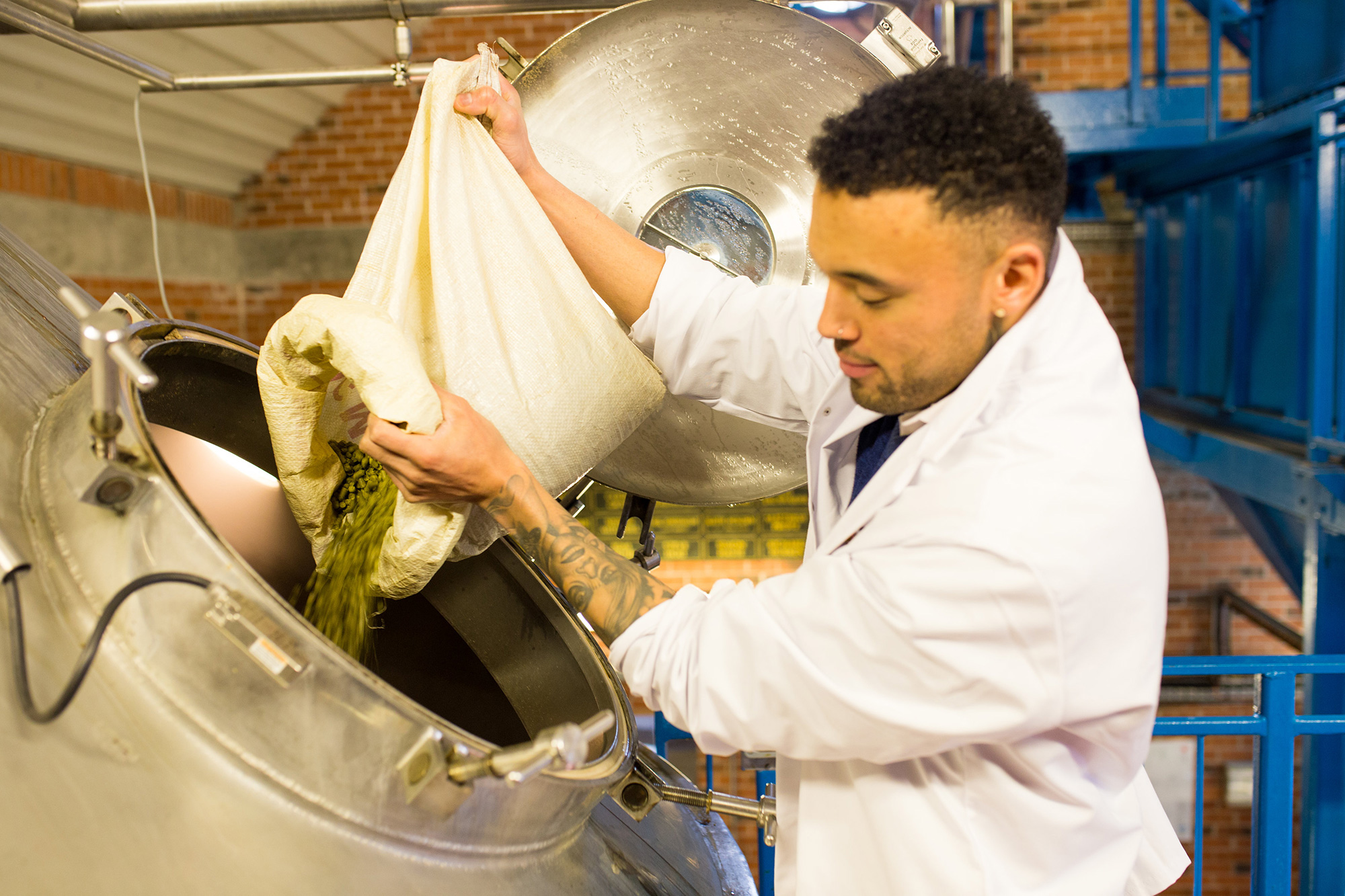 There are many views on what a modern craft brewer means. Perhaps breweries of a certain size, brewing according to traditional artisanal methods and using only good-quality natural ingredients – while also reviving, and also experimenting with, different beer styles from throughout the ages. Hand on heart, we can say we’ve done our fair share of that – and we’ve done it since 1874!

While opinions on the subject may vary, the definition of ‘craft’ is a set of skills passed down through generations. With four generations of brewing under our belt, surely we’re within our rights to call ourselves craft brewers.

As such, we’ve adopted a new slogan along with our updated logo: Craft Brewers Since 1874. Cheeky? Perhaps! But also true. 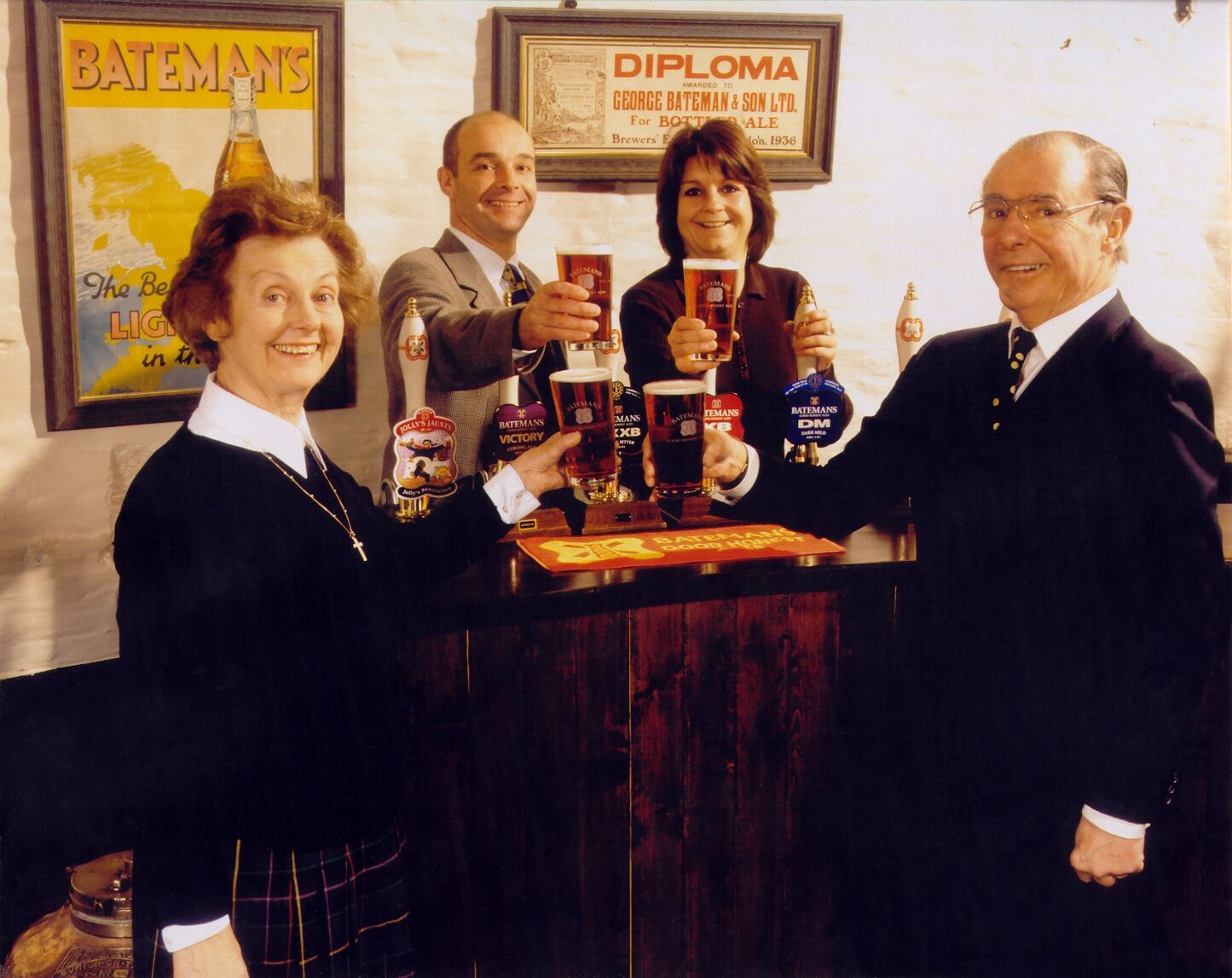 Have you a minute?