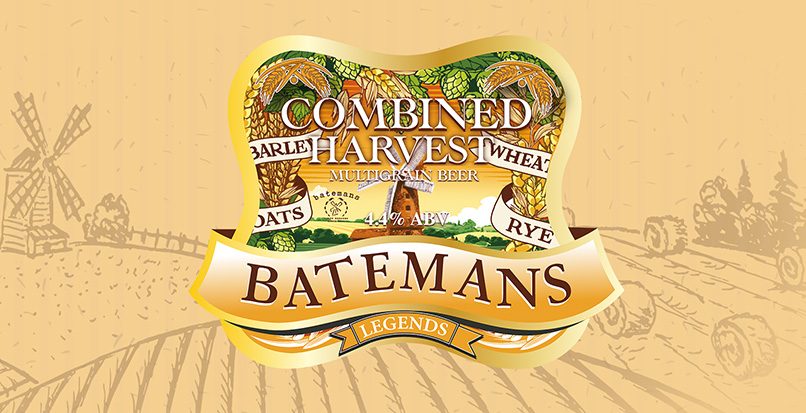 Combined Harvest is a cask beer that is one of our enduring legends and always ranks amongst the seasonal favourites that Batemans produce.  It’s so popular in fact that we bottle it to make sure you can get it year round – more on that later.

More pertinent to today’s story is the question, ‘Why are you brewing a traditionally Autumn beer in March?’ The answer is short and elegant… We’ve got a lot of special events going on toward the back end of 2020; ELR50, the 400th Anniversary of the Pilgrim Fathers, that we mentioned in our January story on Texan Triple Hop and that annual favourite – Christmas! So, to guarantee you some Combined Harvest cask beer this year, we’re making it available in selected Batemans pubs throughout March.

One of the first multigrain beers
Enough of the background, what about the beer?  Well, Combined Harvest really is unique as it’s one of the very first multigrain British beers. Brewed not only with malted barley but also malted wheat, oats and rye.  Although originally the result of an experiment borne of an itch that needed scratching… ‘So, what exactly would a beer brewed with all the available grains taste like?’… the result was so good we’ve brewed it regularly since 2002.

Acclaimed Beer guru, Roger Protz, reviewed it as, “A bronze pale ale brewed with pale and crystal barley malts, combined with malted wheat oats and rye …. The superb aroma is dominated by tart orange and lemon slices fruitiness, with a bready note from the rye.”

Complex but balanced
With so much going in there’s a lot going on. So, whilst being complex and relatively unusual, Combined Harvest remains immensely light and easy to drink. We’d call it ‘well balanced’ with no strong bitterness to put anyone off. Beer Advocate put it rather well, saying, ‘It hits the mouth with a wonderfully quenching flavour full of citrus fruit, rich and chewy malt, and gentle hop resins – followed by a dry, fruity and biscuit finish.’ We’re reliably informed that it’s popular with those that are discovering cask beer for the first time.

Combined Harvest will be available throughout March in selected local Batemans pubs across our patch as well as a lucky few of our free trade outlets.  For those who will not be enjoying winter in our neck of the woods, you can also get it in our newly branded bottles at most good supermarkets.  Failing that, for those looking for real ale online bottles of Combined Harvest are always available in our online shop.

Take me to the beer tasting notes >