Beast from the East

The Beast Is Coming to a Pub Near You 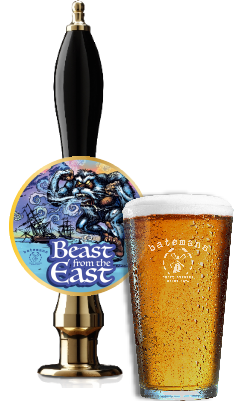 From mid-March will see the return of a fabulous seasonal beer from Batemans.  Beast from the East is a powerful brew @ 5.5% ABV that’s packed with the same punch as the 2018 storm that inspired the name.  Lovers of higher ABVs can expect a refreshing and citrusy flavoured beer with a real hop-packed, crisp finish.

As Winter turns to Spring stronger beers tend to be more popular so we’ve labelled The Beast as ‘a supercharged and grown up brother of our immensely popular ‘Yella Belly Gold’.  If you like a mouthful of taste and an ABV with a bit more bite, then we’d recommend you give Beast from the East a try.

Be One Of The First to Try The Beast

The beer has proved so popular the first brew sold out within a couple of days of us announcing a brewing date.  If you’d like to see where you can go to try it, we will be adding outlets, pubs / bars etc. who will be stocking the Beast, so Batemans fans can track it down.

More will added on a regular basis, keep popping back for updates.
Check with the premises before your journey to avoid disappointment.

Beast from the East also available now in cans >

Whilst the name and initial inspiration for the beer came from the March 2018 storm… to give the beer a little Eastern relevance, we’ve adorned the pump clip with the Abominable Snowman to link the 2018 storm to the beast that terrorised the Franklin expedition that was lost in the North West passage.

Why that expedition?
Well, John Franklin was a local lad from Spilsby who led an expedition to the Arctic aboard HMS Erebus and HMS Terror, setting sail on 19 May 1845.  This proved to be Commander Franklin’s last expedition as the fleet and all crew were mysteriously lost to the Beast…

Good luck and enjoy the beer.

Beast from the East available in cans >