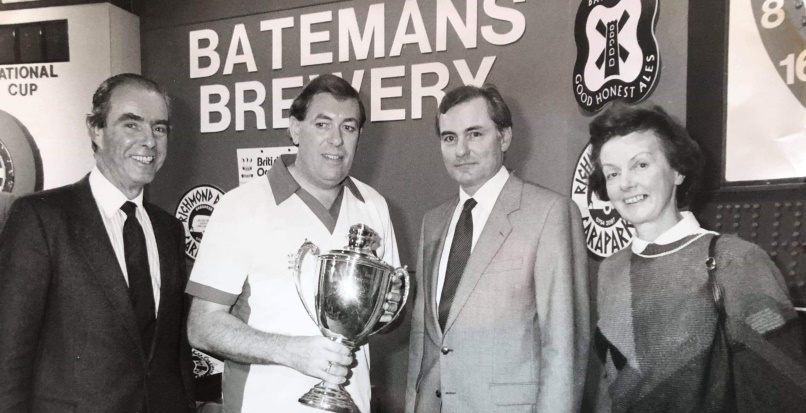 Around 180 darts playing customers, from over 50 pubs and bars across Lincolnshire will be coming to Wainfleet over the next few weeks for two very special ‘John Lowe Darts Evenings’. Both hosted at the Batemans Brewery Visitors Centre.

World Champion and darts legend, John Lowe, will be guest of honour at the events and as well as enjoying the beer he’ll be spending the evenings taking on the best darts players in the area. Each was individually invited from a list of trade customers that have done particularly well selling Batemans Beers since the last event in 2019.

Commenting in the evenings, our general social catalyst and host for the events, Stuart Bateman, said, ‘’I am looking forward to an amazing couple of nights! We love hosting our trade customers and friends at events like this and John’s humour and skills should make for a memorable time.  I’d like to think there are many good things that come from doing business with Batemans but a game of darts with a world champion must be amongst the best.’

The Legend that is John Lowe

Batemans annual darts evenings have been a feature of their trade social events calendar for the last three years.  In that time many of their publicans and customers have enjoyed an evening at the brewery and the chance to play a pro.  Other events in the year include the golf day, race days, Last Night at the Proms, Bands on the Bank and the infamous Batemans Christmas Carol Concert. Each an amazing event in their own right and each open to specially invited trade customers of the Brewery.

If you’re a Batemans trade customer and you’d like to be invited to our next trade social evening, simply speak to your Area Business Manager and they’ll explain what you need to do to qualify for an invitation.

If you’re interested in working with Batemans as a Profit Partner or as a free trade partner please contact the Profit Partnership team or your local Area Business Manager respectively.