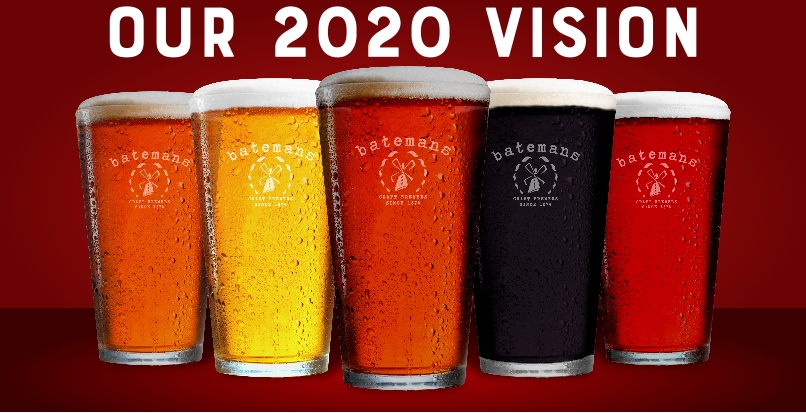 In Autumn 2019 we sat down and hatched a plan that will see us focussing the brews for 2020 on our impressive range of well-loved and proven beers. We also made some exciting plans for the Batemans Brewery Visitors Centre.

Read about our beers >

A new Classic…
Sharper followers of Batemans will have spotted that on top of the original Classics;  XXXB, XB, Yella Belly Gold & Salem Porter, we’ve added two new brews to the stable.  Skull & Hammers (which will be an important beer for us in 2020) & our award-winning Dark Fruits Porter.  The Classics are brewed year-round and remain the cornerstone of brewery production.

Whilst the Classics are at the core of the beers we produce, our Legends lend the Batemans range a little seasonal relevance. The new selection includes two beers, Texan Triple Hop and Pilgrim Fathers, brewed to mark the 400th anniversary and local celebrations around the founding of the new world in America.  Plus, there’s a host of other perennial favourites;  Hooker, for the Six Nations, St George’s Glory for… well we expect you can guess that one. Then of course there’s Rosey Nosey, our iconic Christmas beer to round off the year.

Another important beer for us in 2020 will be East Coast Screamer.  This late summer favourite will be brewed to celebrate a very special exhibition we’ll be hosting at the brewery.  Between August and October, we’ll be supporting the ‘ELR50’ a festival of steam railways.  After all, who doesn’t like a little Rail and Ale!?

The ELR50 exhibition brings us neatly onto the Batemans Brewery Visitors Centre.  ‘The VC’ will be experiencing a number of exciting changes in 2020.  Key to this will be the new and further improved Brewery Tour, a must for lovers of Batemans (and other) beers.

The best Brewery Tour…in the world!?

Our Brewery Tour has been updated for the new season, building on last year’s hard and widely acclaimed work. The 2020 tours will be more informative, more interactive and have been designed to appeal to more people.  Most importantly for beer lovers, the further improved tours will include extended tastings, which we’re sure you will agree will make a great experience even greater.

Demand is already at such a level for tours that we’ll be adding online booking to our website in the new year.  So, if you’re a lover of Batemans beers then why not saunter out to Wainfleet for a day to try them out on their home turf and perhaps take in a new Brewery Tour whilst you’re at it.